Today’s entry introduces the Waymaking Cairn, which has become a keystone of a new practice which I began before I knew that this would be a new practice.  A practice that slowly reveals itself to me as I continue the work. 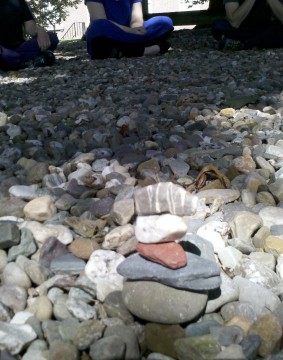 First, allow me to introduce you to the cairn, photographed where it first came into being; on a bed of rocks located on the campus of Rensselaer Polytechnic Institute in Troy, New York, July 2014.   I was participating in a three day Listening Body workshop with about 11 other people, engaging in a variety of meditation exercises as facilitated by Heloise Gold.  In retrospect, I believe the meditation opened up my consciousness, allowing me to deeply focus on the rocks on which we sat. As I sat cross-legged in the circle with the others, I began to select rocks within my reach one at a time, placing them around me, contemplating each one’s unique shape, color and striations, feeling the heft and particular outlines of each.

When we broke from the morning session I picked up the four rocks I had found particularly interesting and put them in my camera bag, intending to take them back to my room. My thought was to add them to a growing collection I had at home, which displayed stones from previous travels around the country.  From across the circle David called to me, “Julie, let me give you a stone.”  I was surprised when he began to search the stones at this feet, realizing that he had no stone ready to give me.  Rather, he was looking for the stone that he wanted me to have, allowing his intuition to guide him, in response to his observation of my careful contemplation of the stones durin

g our circle time.  He handed me an oblong stone, its base color a deep grey, with irregularly placed white stripes circling the stone, zebra-like.   I was touched by this simple gesture and fascinated by this oddly shaped rock that reminded me of a crooked finger, reminiscent of the fifth finger on my right hand, which has a permanently swollen and crooked knuckle from a long ago injury.

At this point, the stones had not yet been assembled into the cairn.  This happened at the next circle time when we were sitting on the same bed of rocks and  I saw Jane, sitting across from me, assembling a cairn.  Later, she would tell me that she had been inspired to make a cairn after watching Jesus make a cairn.  Jesus was to my immediate left in the circle and so the cairn which he made was out of my sight lines as he was stacking his stones on his left side.  At our next break I retrieved my stones from the camera bag and I began experimenting with my five stones looking to see if they might be stackable.  I quickly discerned that there was only one way that the stones could be stacked and that it would always be a precarious balancing feat. This truth would be the first of many metaphorical understandings of how my existence and the cairn’s existence were intertwined.

The Waymaking Cairn comes into sharper focus as I begin to discern how this is a conjoined art practice and meditative practice.

Thus was the cairn born; from an series of simple, unremarkable events that combined to bring about a greater focus and appreciation, a sense of awe and blessing, and a call to continue the journey of discovery in this new art practice. Without any recollection of how or at what moment I was inspired to do so — was it that same day or the next? — the idea came to me to photograph this small cairn in relationship to its surroundings.  The travels of the Waymaking Cairn began; first around the RPI campus, then into the college town of Troy, and onward to the many places we have visited since then.

I have been fascinated by cairns for quite some time.   Coming upon cairns at random places in my travels, I would wonder about who made the cairn. When did s/he make it?  What was his or her reason for making that cairn at that time and place?  After that fleeting sense of connection to the mysterious maker of the cairn in some previous time, I would let go of that train of thought and simply focus on the cairn itself, feeling its call:  be here, now; be still, breathe; attend to this moment of time and focus on being in this place and only this place. Interesting to note is that I have long understood my photography practice to be a meditation, a manifestation of the call to attend to the moment in time and place.  But I had never before felt the need to create a cairn and leave it in any

particular place.  Now I employ the cairn to attest to the meditative act, acting as a visible partner while serving as iconic subject, as a witness in each photographic image. It has taken on the status of my token item.   Hmmm, could this be a new variation on the role of participant observer?  I think so! 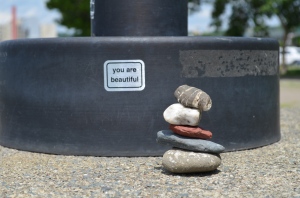 When I realized what a strong hold this new practice had upon me, I began researching cairns appearance in various cultures and geographies through the ages, in the hopes of using the information to better explain to myself and others what this new practice was about and why it was important.

Cairns were often used to mark a place of significance for the person(s) who created the cairn.  Though the Waymaking Cairn is no more than 6 inches tall, some cairns are huge, weighing many tons and would have required numerous people and machinery to put these boulders and stone piles into place. Whatever the size, the cairn as marker seems (to me at least) to be there to alert others to the place as well. Sometimes cairns serve as geographical markers at key crossroads.  Other times historians conjecture that they mark the place where something significant took place.  Maybe it was a birth, a death, a wedding, a peace treaty, a ceremonial marker…. the possibilities are as infinite as are human activities. What all cairns seem to have in common through the ages is that they mark as special a time, a place, an event, a person or persons, a relational event, for example.

I experimented with a few names for this cairn and this project.  I considered calling them listening stones, acknowledging their origin during the Deep Listening conference.  But a cairn is more than the individual stones, it becomes a new entity and now when I see the individual stones, they feel incomplete to me – their true identity is the particularly ordered stack that you now see.   Because this cairn bears witness to a location and moment of attention then moves on, the name WayMaking Cairn seemed best.  Only after naming it did I come across another, similar term: ‘waymarking cairn.’ I still prefer the distinction offered in WayMaking  because it emphasizes for me the sense of life journey.   What I understand and elaborate upon in this practice, which is an awakened life journey, is the act of being fully present to the world in which we live.  I do this by paying special attention to the mundane, often overlooked places and times, as well as those things that more easily can evoke fascination and wonder. I don’t have to know why places, people, objects and events call me to photographically mark that place in my journey, I need only be grateful for the breath of life and the glorious senses that allow me to see, hear, wonder,  bless and even giggle sometimes in the moment of feeling alive and connected to the world around me in these precious moments of encounter.

I will be regularly posting photos of this participant observer WayMaking Cairn bearing witness to the mundane, the extraordinary, the overlooked, the sublime, the ordinary, the unremarked  and miraculous in our travels.  We chronicle the sacred act of attention and connection to life. Oh, yes, and the lovely, regular encounters with whimsy!