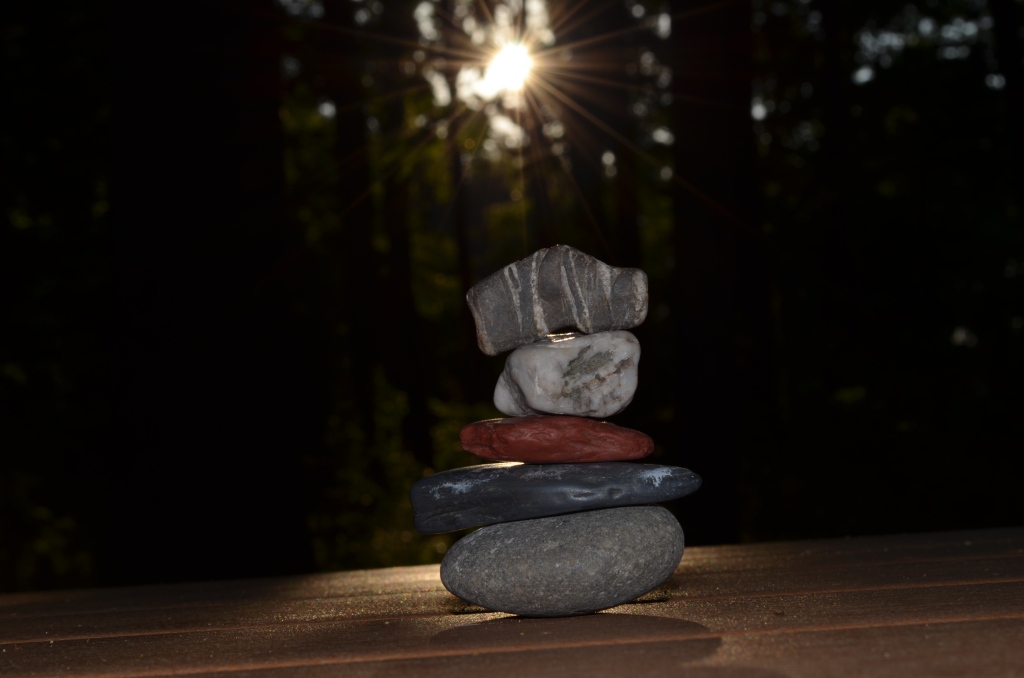 While driving to Vermont to attend commencement at Goddard College, I stopped at a rest stop along I 90.  After driving most of the day, its no longer clear to me whether I was in eastern Ohio or had just crossed into New York.  The late afternoon sun took my attention away from my road-weary body and I brought the Cairn to this site to bear witness to this ephemeral moment in time and space.  Refreshed, I continued on my trip and arrived at Goddard the next day. 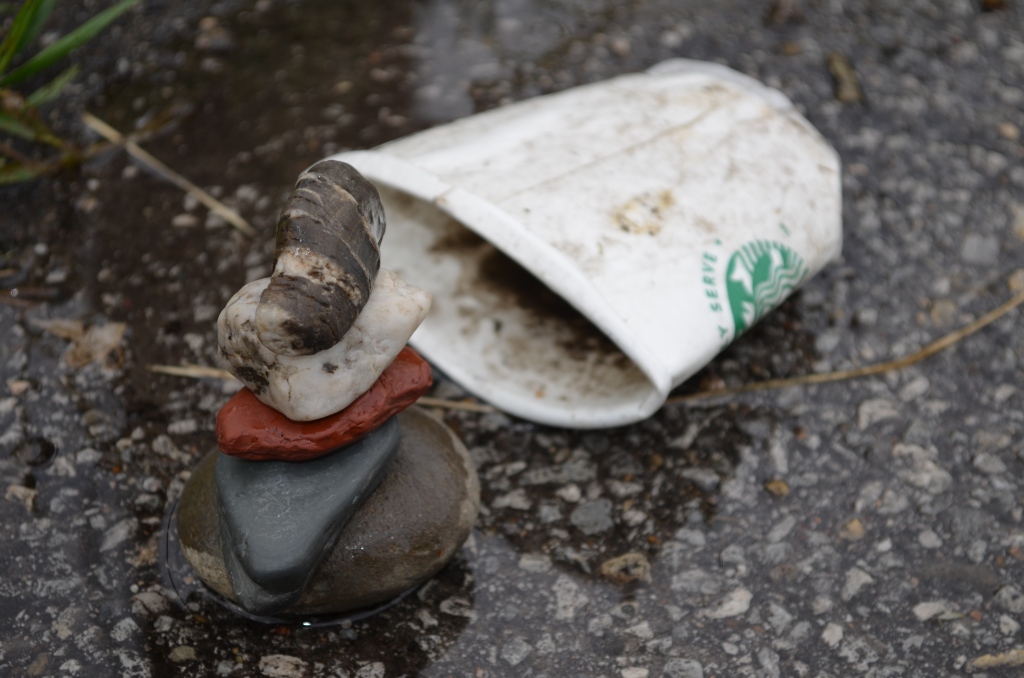 The WayMaking Cairn’s recent encounter with a discarded Starbuck’s coffee cup provides the grist for this post.

First, please recall where the name Starbuck originated. A quick search on Starbuck the character takes us to the Cliff Notes website. Remember Cliff Notes?  The redemptive resource for all high school English class procrastinators as they cram the night before the exam?  Cliff Notes has joined the ranks of every academic resource by establishing its own website presence.   Click here to see its full character analysis for First Mate Starbuck in the classic Moby Dick, which I’ve redacted here for brevity’s sake.

“The first mate is the only man aboard the Pequod who resists Ahab’s plan to devote the ship’s mission to hunting and killing the White Whale. …..  But he lacks Ahab’s power. The chief mate argues that the ship’s mission, as prescribed by the owners, is to harvest as much whale oil as possible and return home safely, showing a profit. He feels it is “blasphemous” to be enraged by a dumb object of nature such as a whale, and he realizes that the lives of all aboard are at serious risk….. Ultimately, however, Starbuck acquiesces. He concedes that he is no match for the enormity of the charismatic captain’s spirit. Even though he is certain that Ahab is mad, Starbuck cannot take the action necessary to stop him. At any rate, the first mate obeys orders. As a character, he changes only because he submits to Ahab”

Parallels abound here as we consider the relative weights of the moral choice vs. the expedient choice made by both Starbucks. Consider these observations by Adam Minter in his April 2014 post Why Starbucks Won’t Recycle Your Cup on Bloomberg View.  Minter reports that Starbucks produces over 4 billion disposable cups per year.  Though the company announced in 2008 its goal of instituting recycling at all its company owned stores by 2015, it admitted in 2013 it had only achieved 39% compliance and doubted that it could ever achieve its goal of 100%.  Why?  Its not cost effective to recycle the cup fibers when the plastic inner coating also has to be dealt with.  Unless the company produces much more paper waste to make the plastic removal process profitable, there is no motivation to recycle the cups.

Minter then opens the lens to consider our participation as consumers in perpetuating the use and discard of paper cups.  “Composting keeps the cups out of landfills, but it generates greenhouse gases while destroying the recycling value packed into the cup’s fibers. Reusable cups are a nice idea, but one that consumers simply don’t embrace. In 2008, for example, the company set a goal of serving 25 percent of all beverages in personal, reusable tumblers by 2015; in 2011, it served just 1.9 percent in personal tumblers, and lowered the 2015 goal to 5 percent, despite making available low-cost tumblers (which have their own recycling issues).”

So, Starbucks, like its namesake in Moby Dick, cleaves to the highest totemic values of instant profitability (closing its eyes to the other costs to our world and our health in excessive greenhouse gasses) AND closes its eyes to the blasphemous nature of its own behavior.  But, before we all jump on the bandwagon of finger pointing at the big corporations who make so much money in this array of unsustainable practices, let’s look in the mirror:  we who consume Starbucks or any food item in a disposable cup or container, are also guilty of the same unethical and lazy behavior. 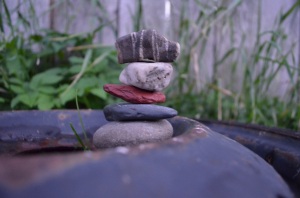 A few weeks ago I was coming home around midnight.  As I drove down the alley toward my garage, I came upon four old tires lying in seemingly random locations across the alley right in front of my garage. I stopped the car, rolled each of the tires, one by one,  to the side,  safely out of traffic’s way on the grassy aisle between my fence and the alley’s asphalt surface.

How those tires could have come to be there in the first place is probably a never-to-be-solved mystery.  Perhaps one of the many scrappers in the area lost them off the top of a too-full truck of found treasures? Was this a deliberate prank of some sort?  A “gift” from someone who heard of the Waymaking Cairn’s ongoing contemplation of our daily trash?

Whatever brought the tires to my alley will probably never be known, but I was presented the next day after an afternoon rain with an opportunity for the WayMaking Cairn to contemplate these tires where they lay since the night before when I moved them out of the way.

The Rubber Manufacturers Association says this about rubber tires: “Properly handled, scrap tires do not present any major environmental problems.

If improperly handled however, scrap tires can be a threat to the environment. Tires exposed to the elements can hold water and be a breeding space for mosquitoes that carry disease. Tire piles can be set on fire through arson or accident. These fires are difficult to put out, and produce heavy smoke and toxic run off to waterways. Tire piles can also harbor other vermin, such as rats and snakes.”

My neighbor Bev, after suggesting I might make wall-mounted planters with the tire, then called the city to take the tires away. 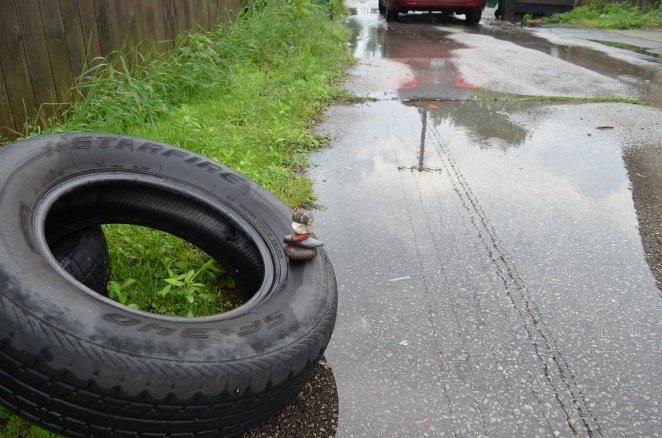 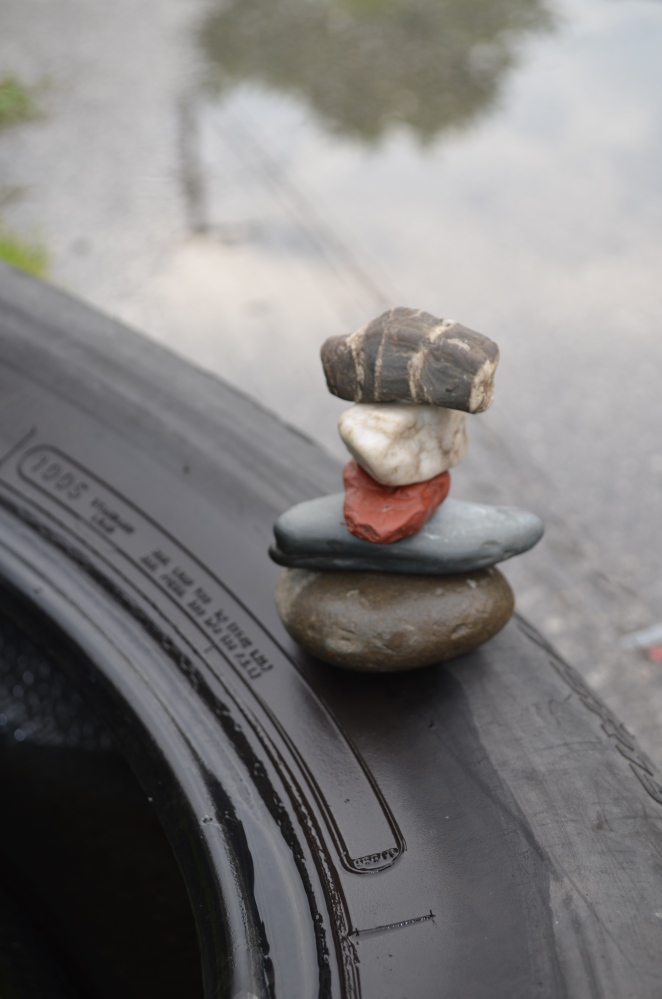